But we’ve hardly had a Summer yet!

I know… but it’s worth knowing that we tend to stock early for the coming seasons, and this year is no exception.

Already the August cries of ‘Are you closing down?!’ have abated, as our stock of 3ltr shrubs, perennials and climbers are now potted and on display. I’m most excited about the perennials, which I expect will sell quickly. For the time we’re growing Hosta ‘Empress Wu’, one of the largest hostas in the world.

Growing up to 1.5m and spreading to 2m, it really would make a statement… providing you have the space.

We’re a little late to the party, but we’ll also have a few Salvia ‘Hot Lips’. I’m not convinced the flower lives up the hype, seems a bit lost amidst the foliage to me (but then I’m colour blind… which doesn’t help!) 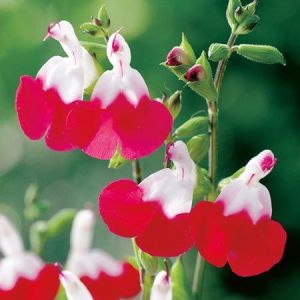 Aside from the shrubs etc., we’re already selling the first violas and pansies. Our trailing range is proving ever popular, and the breeders of the ‘Cool wave’ range we stock, promise it’s as well branched and ‘florific’ (apparently) as ever. It’s one which works in a basket all alone, though due to it’s vigour, I really think that it differs from standard autumn basket pansies in that it’ll need a bit of extra feed. So don’t skimp on the quality of the compost! Our Levington M2 mulitpurpose is more expensive than most retail composts (it’s actually a professional range you wont get elsewhere) but it’s worth the money. I guarantee you’ll appreciate the difference.

We’ll have a full range from early September, until the end of October. So come on down, and please don’t wait too long, November shoppers will miss us at our best.

There’s never a lot of choice in July and August… But we do have some stock. The last few bits from the bedding-plant season will still be around (providing you’re not picky) until August. We’ll have baskets and tubs for sale, but honestly, if you’ve not planted yet, I’d generally advise waiting until the Autumn bedding in September.

Speaking of which- Our planting schedule for the Autumn begins quite soon- and we’ve got some exciting stuff on it’s way.

Cool wave pansies are revolutionising the autumn hanging basket market. I was skeptical to begin with- the plants looked (individually) like a bad panola with an unusually long inter-node. However, they branch spectacularly, and fill a basket in a matter of weeks.

Alongside these we grow our usual range of pansies, some new colours are coming this year, such as a compact red blotch which seems much improved.

Whilst there’s not a lot going on at the nursery right now- behind the scenes we’re busy. We’re potting well over a hundred lines of shrubs and another hundred or so perennials- all ready in time for late August. Look out for some impressively sized hostas…